My Top Ten Flowers to Grow

Even though professionally I’m an herb grower, you can still find lots flowers tucked in and around the farm. I have this Top 10 Annual Flowers that I need to grow rolling around in my head. Every year I tell myself to stick to my grocery list … and “buy only what you need Kelly” but inevitably I’ll add some sweet pea or foxglove seeds. And as space on my small plot is at a premium I have to get creative in not only where I grow them, but also how I explain to the husband why there are non-herbs planted in the hoophouse or field.

I try to console myself (and my pocketbook) by telling myself I can always sell the flowers in bouquets at market or stems to a florist and then I’ve made money, rather than waste it. But mostly, I just want them for me-I’m greedy that way. I want all the plants! (I hope you read that in the same stick-figure cartoon meme voice I used in my head) 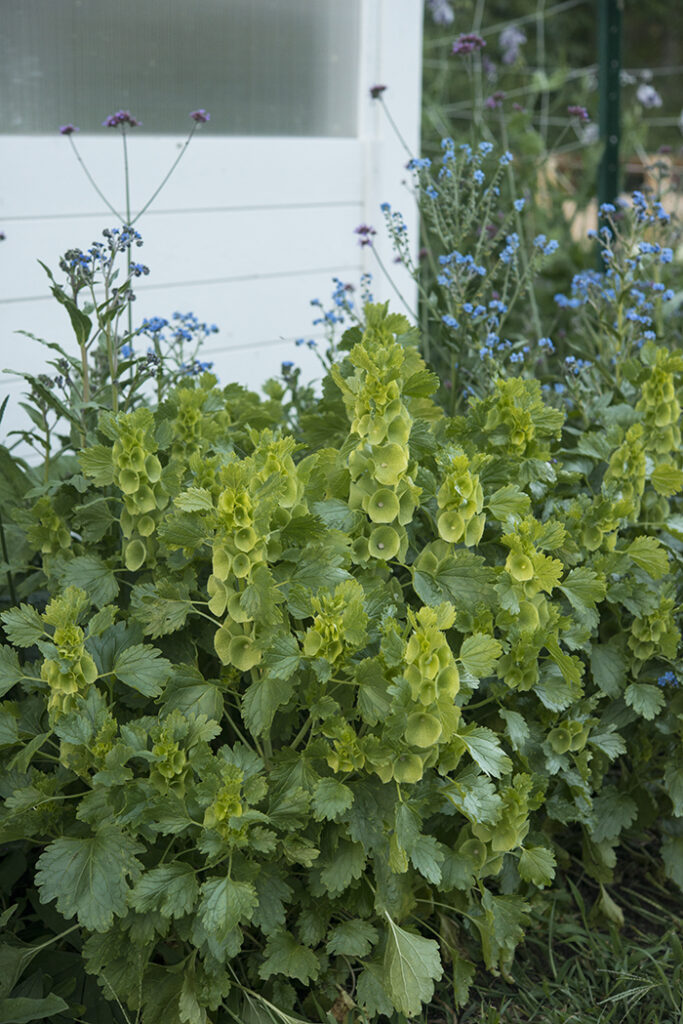 I love these green spikes because they lend such elegance and height to any arrangement or border, and best of all they’re super easy! Just condition the seeds by tossing them in the freezer for two weeks in a jar and you’re good to go! Most seed packets recommend direct sowing, but up here in zone 5 that doesn’t work for me. So I start the first batch 8-10 weeks early in large 3″ pots so as not to disturb the roots too much. Give them plenty of water and sun and they will produce up a storm. If you don’t harvest regularly, your plants may require staking. Also I succession sow these twice. 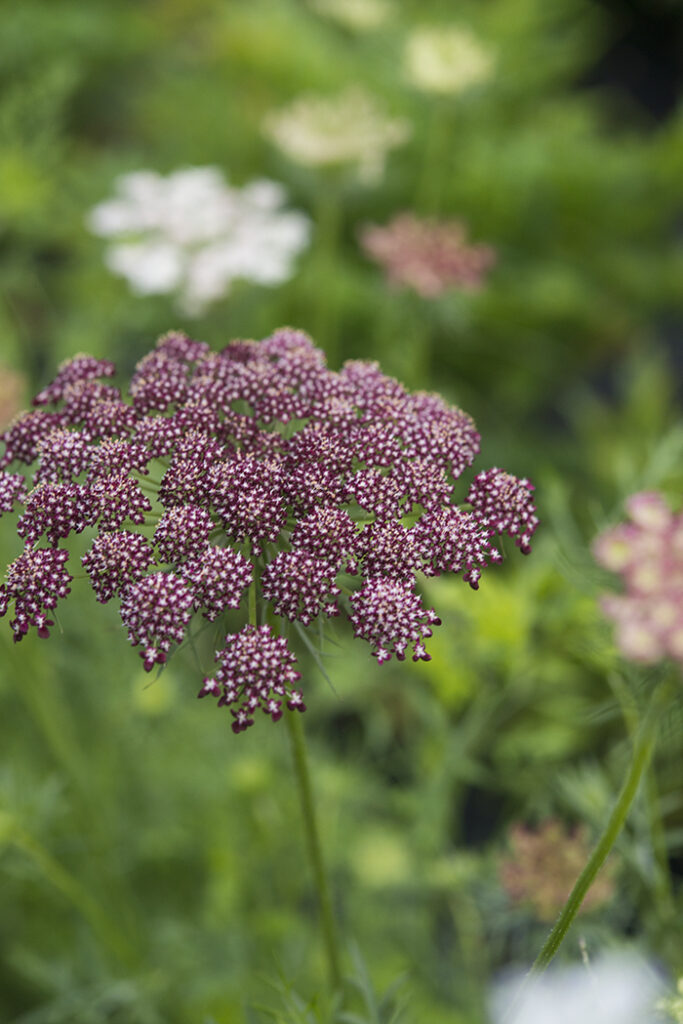 The traditional Queen Anne’s Lace has been a favorite of mine before I knew much about plants, but a couple of years ago I saw these in a friend’s garden and I was SOLD! Technically an ornamental carrot, they’re called Ammi ‘Dara’ or Chocolate Lace Flower, and come in shades of pink, mauve and purple. And they’re just stunning! As a carrot relative, they too don’t like being transplanted, so if you start them early–like I do–make sure to chill them in the fridge for a couple (1-2) weeks and sow 4-5 weeks early. I’ll succession sow these babies every 2-3 weeks till mid-summer. These are one of those flowers that the more you cut, the more they grow.

As a scented plant enthusiast (read: true fanatic and addict) I’ve grown heliotrope almost as long as I’ve been gardening. They smell HEAVENLY! My mother used to grow them in containers and borders so after a rain or as you brushed by, they would release their delightful scent. These little purple beauties are one of the stars of the cottage garden and even though they’re considered perennials in more temperate parts of the country, they’re annuals here in Maine. Start these seeds early (10-12 weeks) as it can take up to a month for them to germinate, but you will be rewarded for your patience with their sweet scent once they get going. I also make sure to pinch these gals back 2-3 times (just like you do to basil) to encourage bushier plants. 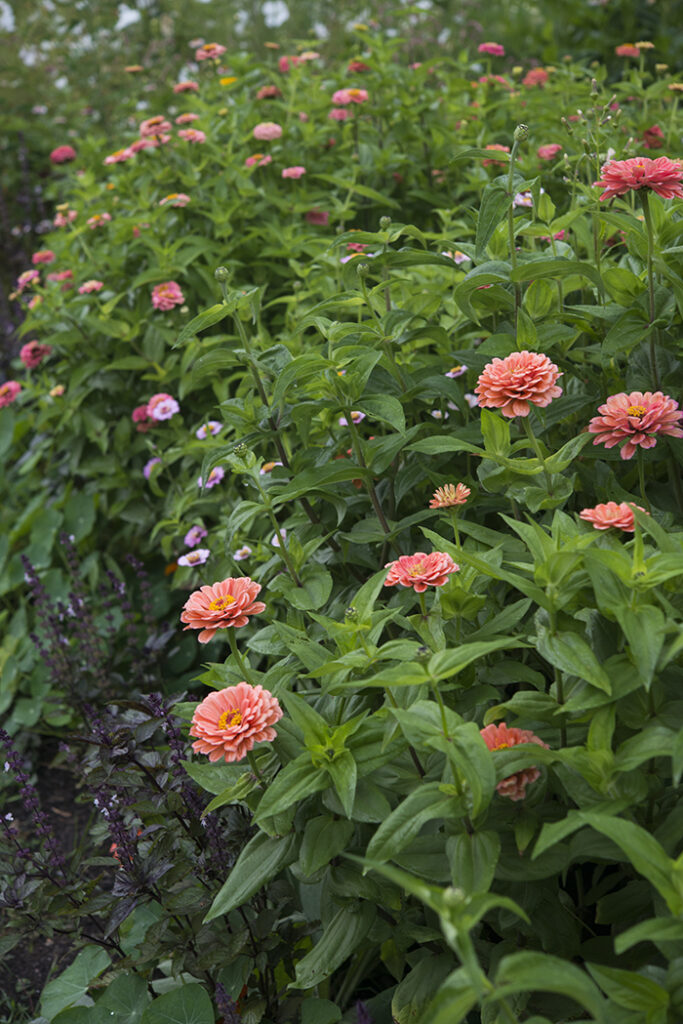 Initially I was not on the “I love zinnia bandwagon”, they were a slow burn for me. My sister kept bugging me to grow them for years and so I grew a few traditional varieties to placate her. But I soon learned that the zinnia is a little worker-bee. It just keeps going and going, and does especially well in my cooler climate. So I began experimenting with some varieties like the ‘Zinderellas’ and ‘Benary Giant’ series (6″ wide, double bloom). They come in almost every color you can imagine, vigorous, tolerant and are super easy. Follow the directions on your seed packet,  transplant your four-week old seedings after the danger of frost has passed and pinch back for more stems. And don’t bee surprised by their height. By the end of the season mine reached my shoulders (although keep in mind I’m just a few inches over five feet).

What I love about nasturtiums is how easy and useful they are. I prefer the vining forms in salmon, yellow and variegated gleam varieties. Sow two seeds at a time, three weeks early or direct sow. They are a great choice to soften borders or cascade out of raised containers. And guess what?! … they’re actually an herb! Their petals will brighten up any bland-looking salad or chop up their leaves to add a peppery bite!

Cosmos are tall! Make sure wherever you plant these powerhouse flowers that that will not shade out any sun-loving plants. Mine were taller than me, making garden cleanup at the end of the season a little trickier for me. Start cosmos seed 5-6 weeks early and transplant after frost. I prefer the soft, fluffy ‘Double Click’ varieties over the more delicate ‘Versaille’ or ‘Seashell’. The more room you give them, the thicker and stronger their stems will be.

This is not the same verbena you traditionally see at the garden center, they are tall, billowy and look great in borders and bouquets! Again, they’re a tender perennial, meaning they won’t survive the Maine winter (which lets me keep it on this list!) so I sow them 8-10 weeks before the last frost. Keep in mind germination can take a while and they’ll rot if the soil is too moist. A heat mat will help get them started. Transplant outside once frost has passed literally anywhere. They don’t have much of soil preference and only need a small footprint. I plant mine between the vegetables in my kitchen garden to add some color and height. They’ll go like gangbusters from the Fourth of July till frost! 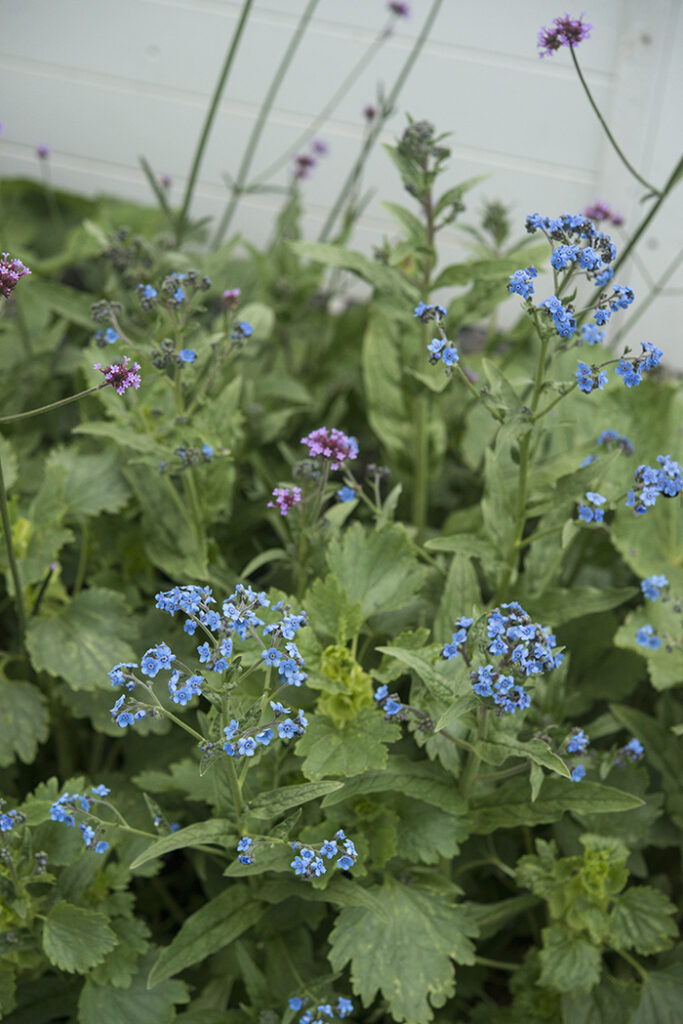 I saw these for the first time in my farm-market-neighbor’s bouquets and I was a goner. After this introduction I was so in love with these blue babies I ordered 1/4 lb. of seed! Needless to say I didn’t have to order more of these, like ever. Mainly because their seed is easy to collect once they’re finished. On a side note I would suggest only allowing a select few at the edge of your garden to go to seed, and pulling the rest before they get to the seed stage. Each plant makes so many seeds, but it’s more than that, the seeds have sharp spines that stick to your clothes when cleaning up at the end of the season. I still can’t get them all out of my shirt. So, learn from my mistake; grow them, love them, cut them and compost them-before they set seed! As a bonus, the bees love them! 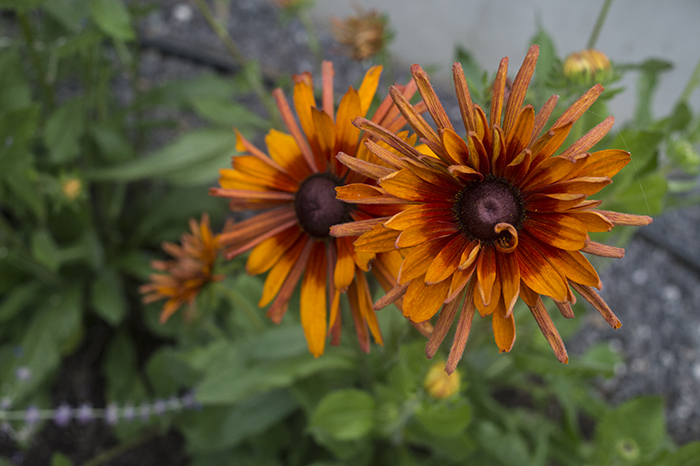 Rudbeckia come in many more colors and shapes than the traditional yellow and black combination you know as the classic Black-Eyed-Susan. My current favorites are the ‘Cherry Brandy’ and ‘Chim Chiminee’ mix. Get them off to an early 8-10 week start. They preform exceptionally well in summer with warm, long days. Their stems get shorter and flowers smaller as the weather cools in the fall, but the’re a strong summer producer as long as you deadhead regularly. 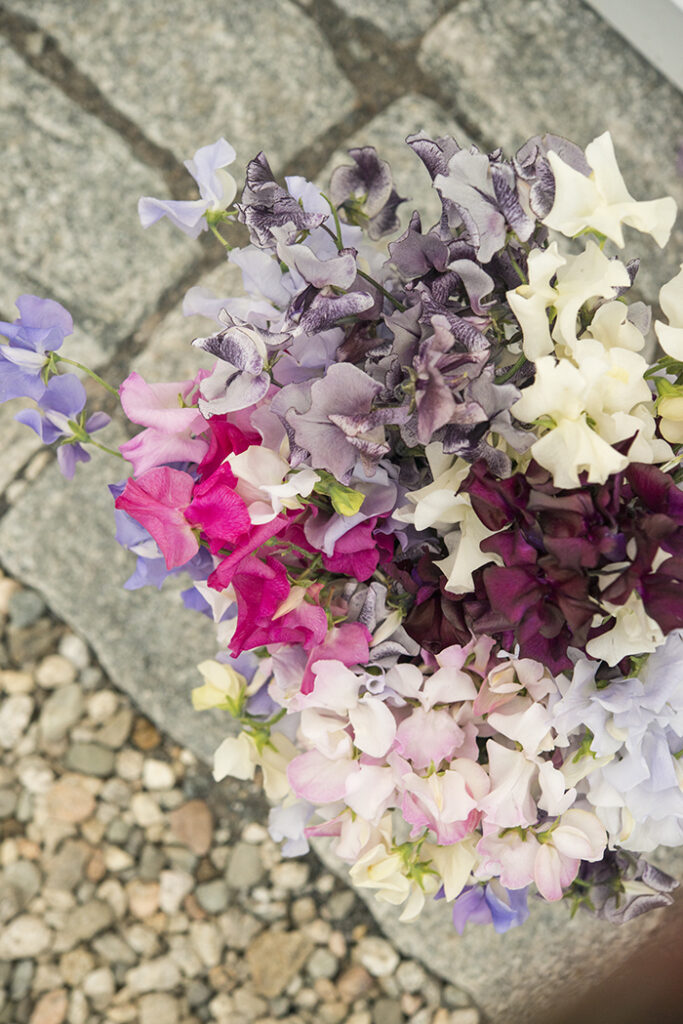 Sweet Peas. Oh my. I saved the best for last. If you’ve never grown them. DO IT! The heirloom varieties are the most scented, but I think they all smell wonderful! They come in plenty of colors and are a super productive flower! They need some help getting started-which I do in early February.

To break dormancy and speed up germination, soak your seeds overnight (12 hours, but no more than 24 hrs), they should look swollen by the morning. If not, use a sharp knife to nick the seed coat and soak for an additional 6 hours. Plant in 2.5″ pots and label!! I cannot overstate the importance of remembering to label. Three years ago I thought I’d remember which varieties were which since I made this handy-dandy map in my garden notebook … after a few waterings I realized the trays had been reoriented and moved about. So I had to plant them and wait to see where each variety popped up.

As vines, sweet peas need something to climb on. I’ve used everything from wooden lattice, cloth netting, and chicken wire to metal mesh fencing, which I think works best when stretched between metal T-posts. Give them plenty of water and harvest regularly! They will produce all season long as long as you don’t leave spent blooms on the plant, otherwise they begin seed production mode. So pick, pick, pick and if you have too many, share a bouquet with some friends, it’ll be sure to make you the most popular girl (or guy) on the block!

So there you have it, my Top 10 Annual Flowers! And you can be sure I will find a home for these plants, and probably others. My willpower is only so strong when I’m looking through seed catalogs in these cold, Maine winters!

For more on growing and the organic kitchen garden, check out my new book, The Backyard Gardener!

Annual Flowers: My Top 10 Flowers for the Garden Gallery

Annual Flowers: My Top 10 Flowers for the Garden

A Beginner’s Guide to Pinching Plants 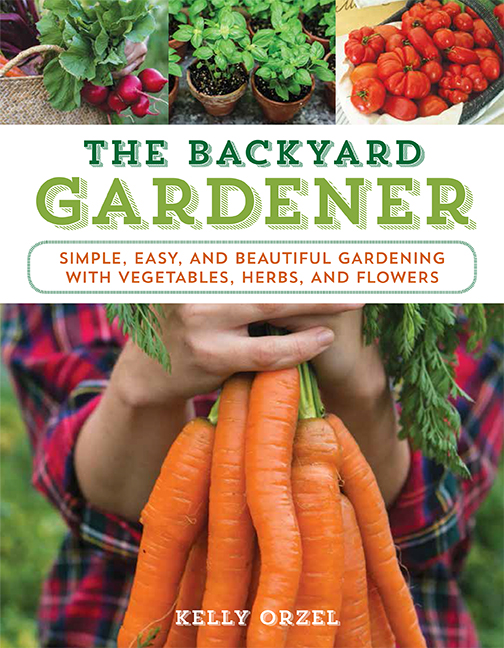 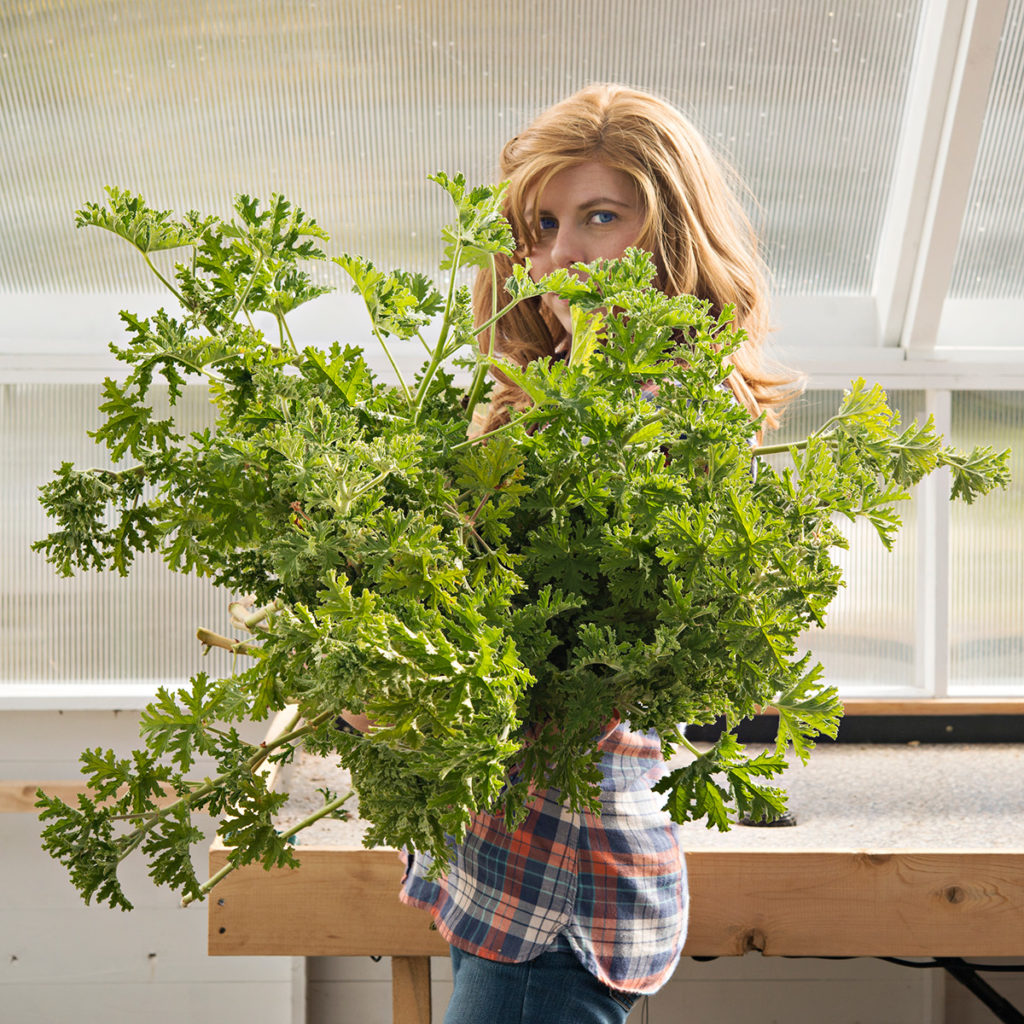